Webinar Video: Confronting the Arctic Climate Crisis – What Arctic Countries and the Shipping Industry Can Do 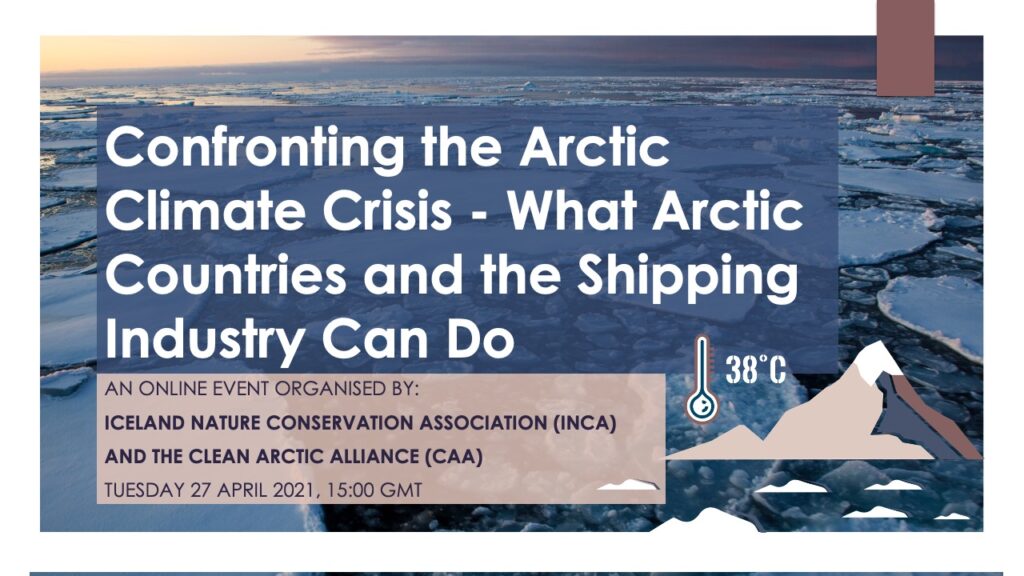 How can the shipping industry become actors of positive change for the Arctic region? How can we inspire political will and decisive action by governments? What role can Iceland and other Arctic Council states play? How can we save the summer sea ice for Arctic communities and the health of the planet?

Ahead of May 2021’s Arctic Council Ministerial, hosted by Iceland, this webinar aims to highlight the climate crisis in the Arctic, the impacts of these changes and what Arctic governments and the shipping sector can contribute to tackle the Arctic climate crisis.

The Arctic is undergoing an acceleration in dramatic and unprecedented changes. Warming faster than anywhere else on Earth, the Arctic has seen temperatures soar to 38oC in Arctic Russia, and lowest ever July Arctic sea ice extent on recorded. Last September saw Arctic summer sea ice reach its second lowest extent since records began over 40 years ago – and subsequently, winter sea ice took longer to reform.

In light of these latest changes it now seems likely that the summer ice cover across the Arctic will have disappeared long before countries achieve climate neutrality by 2050.

These sobering events underline the urgent need for collective action – and the shipping industry has the opportunity to lead on this action. Rapid and effective measures should include reducing shipping black carbon emissions in line with the Arctic Council’s own black carbon reduction target and speeding up the introduction of a ban on the use and transport of heavy fuel oil (HFO) as fuel by Arctic shipping.

The need for greater effort to protect the Arctic from the impacts of shipping has never been more crucial. Recently, Norway has announced its intention to protect all the Arctic waters around the island archipelago of Svalbard with a ban on HFO use and carriage within its territorial waters from 1 January 2022, but more needs to be done.