Why the IMO’s draft Arctic HFO regulation will not protect the Arctic, and how to fix it 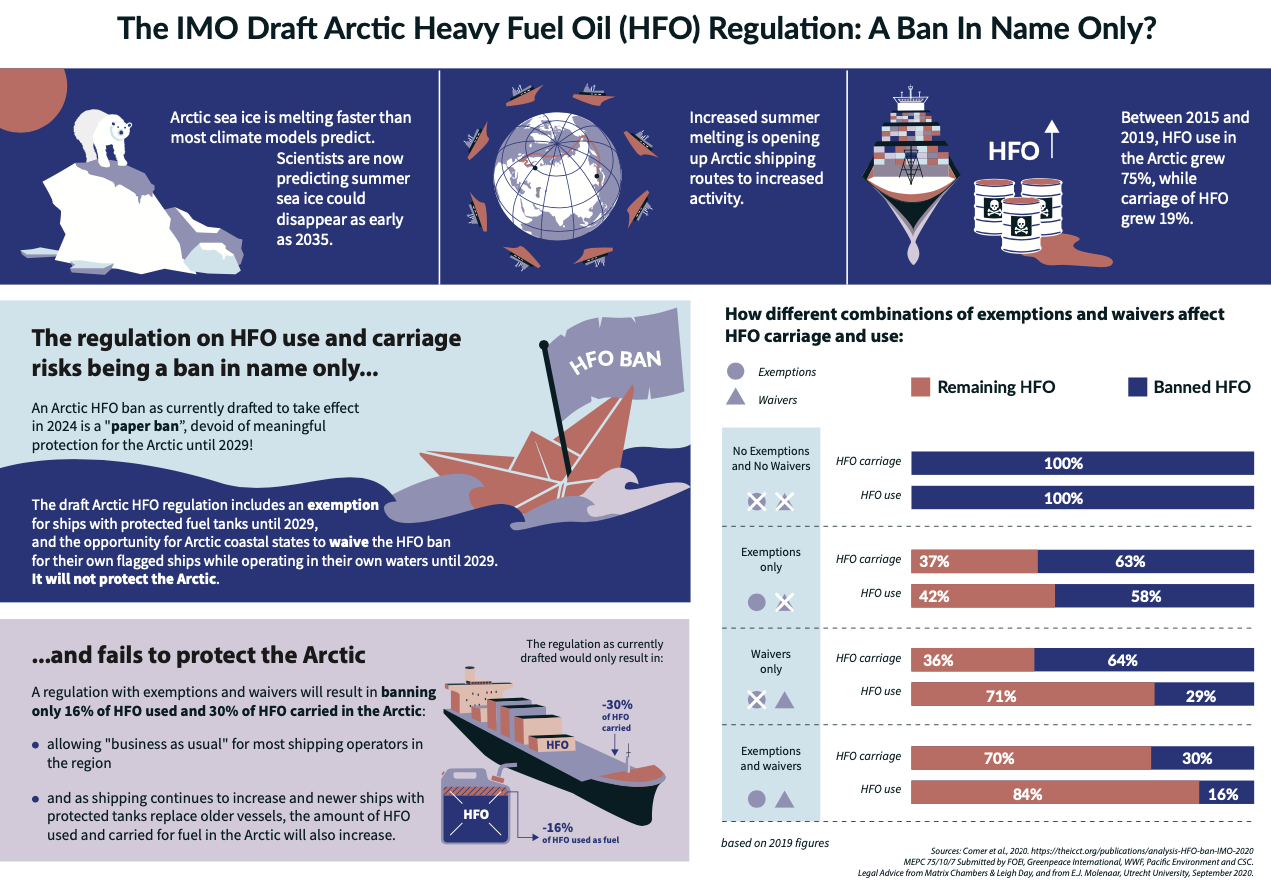 It seems as though every week brings new, dire warnings about the state of our planet, and in particular our polar regions. Arctic sea ice recently reached its second lowest extent in 42 years, along with a record low for October; Russia’s Laptev sea has been slow to freeze, we’ve seen the collapse of Greenland’s Spalte glacier and Canada’s Milne Ice Shelf, and temperatures beyond 38 degrees Celsius have been reported north of the Arctic Circle. The fact of global heating is not in dispute – but the levels of response from governments and UN agencies varies wildly.

Just this week, the United Nations Framework Convention on Climate Change (UNFCCC) and other organisations are running the “Race to Zero” dialogues, part of an ambitious interconnected global drive towards zero carbon emissions. Mr Kitack Lim, the Secretary General of the International Maritime Organization, which regulates global shipping, is taking part.

Yet in the shipping world, Member States of the IMO are demonstrating meagre ambitions for reducing shipping emissions, and pursuing a regulation that instead of banning polluting heavy fuel oil (HFO) from the Arctic, will actually prolong and allow an increase its use.

If the global shipping industry were a country, it would lie 6th in the carbon emitter’s rankings, above Germany – with 1 billion tonnes of emissions a year, around 3% of the global total. In October, the IMO’s working group on reducing greenhouse gas emissions developed an extremely weak proposal known as “J/5.rev1“ that at best would shave 1.3% from the business-as-usual growth pathway of 14% by 2030. In short, unless delegates reject reject this weak deal, IMO will endorse a climate plan that will see emissions from ships keep growing for several decades – backtracking on its own commitments made in 2018 to strive for a short-term peak in emissions.

These emissions have a direct impact on the Arctic, which is warming twice as fast as anywhere else on Earth due to global heating. What happens in the Arctic doesn’t stay in the Arctic – loss of sea ice is likely to drive instability in the polar regions and upset weather patterns while the melting of Greenland’s ice caps is set to raise sea levels in port cities around the world.

The decline of Arctic sea ice is expected to open up little used shipping routes including the Northern Sea Route – across the top of Russia – to ships trying to find a faster, cheaper route between the Pacific and Atlantic oceans. But the decline of sea ice and greater accessibility to ships increases the risk of accidents, particularly due to the hazards of navigating poorly charted waters. As well as the dangers of HFO spills – an Arctic oil spill would prove nearly impossible to clean up, the burning of fuel such as HFO has a direct and localised impact for the Arctic sea and glacier ice. When black carbon particles fall on ice, they reduce its ability to reflect light and heat, which leads to accelerated melting. As the snow and ice melts, the darker surface of the land or the sea beneath continues to absorb heat. In short, the use of HFO by Arctic shipping contributes to the acceleration of multiple feedback loops that are contributing to dramatic changes in the Arctic and elsewhere.

In February the IMO’s Pollution Prevention and Response meeting agreed on text for a regulation which will ban both the use and carriage of HFO as fuel by shipping in the Arctic. Our coalition of 21 non-for-profit organisations, the Clean Arctic Alliance, acknowledged the news with caution, pending further analysis. And that analysis demonstrates that if adopted in its current form, it will be a ban in name only.

Research by the International Council on Clean Transportation found that loopholes in IMO’s draft regulation means that exemptions to the ban and the allocation of waivers by central Arctic coastal states will allow up to 74% of HFO-fueled ships to continue using HFO in the Arctic until mid-2029. As a result, only 30% of HFO carriage as fuel and 16% of its use would be banned when the regulation comes into effect in mid-2024. This suggests that the IMO is more concerned with mitigating the impact of a HFO ban on the industry, than mitigating the impact of the shipping industry on the Arctic.

In addition, incredible as it seems, the amount of HFO carried and used in the Arctic could actually increase after the ban takes effect. The reasons are three-fold. By 2029, the levels of HFO being used and being carried as fuel in the Arctic are expected to increase to be higher than they are when the ban comes into effect in 2024;

Legal advice provided to the Clean Arctic Alliance shows that the waiver clause raises some serious concerns, with ships flagged by the five central coastal Arctic states – the Arctic Five – able to by-pass the ban by issuing waivers, This means that the regulation is not flag-neutral and will create a two-tier system of environmental protection and enforcement in the Arctic, which will result in lower standards and negative environmental consequences in Arctic territorial seas and exclusive economic zones. Instead of mitigating the risks associated with HFO, the regulation will maintain the risk of a catastrophic HFO spill in Arctic waters and fail to address trans-boundary pollution risks.

Just this month Norway has introduced a proposal to extend the ban on the use of heavy fuel oil in the waters around Svalbard, putting it in a more ambitious position than any other Arctic nation, or the proposed IMO ban.

Both the HFO ban and and shipping greenhouse gas emissions will be discussed during next week’s meeting of the IMO’s Marine Environment Protection Committee (MEPC 75) – the first such meeting to be held virtually. The Clean Arctic Alliance is calling on IMO Member States to strengthen and improve the draft Arctic HFO regulation by removing or amending the exemption and the waiver clauses, and by bringing forward its implementation dates. Failure to do so will result in the approval of a ‘paper ban’ on the use and carriage of heavy fuel oil – devoid of any meaningful protection for the Arctic. We believe that an IMO ban on HFO use and carriage as fuel in the Arctic should be comprehensive, with real impact; that it should enter into force quickly and provide the Arctic with the level of protection that it needs.

Despite the dramatic changes occuring in the Arctic due to global heating, the risk to the Arctic from emissions of black carbon from shipping is not likely to be addressed at MEPC 75. The Clean Arctic Alliance is calling for the IMO to develop and adopt a Black Carbon resolution which would set out recommended interim measures pending completion of IMO work to identify and implement one or more Black Carbon abatement measures.

It would be reasonably assumed that as a UN agency, the climate crisis alarm bells would be echoing throughout the IMO’s London headquarters. But currently this does not seem to be the case. The IMO, and its member state delegations, are in danger of making token gestures that sound good, but with minimal or no immediate changes required for the shipping industry, while providing little benefit for the future of our planet. Next week is an opportunity to put this right.

Dr Sian Prior is Lead Advisor to the Clean Arctic Alliance

On the opening day of next week’s MEPC 75 – Monday 16 November – the Clean Arctic Alliance will hold a webinar, Why the IMO’s draft Arctic HFO regulation will not protect the Arctic, and how to fix it. Registration: