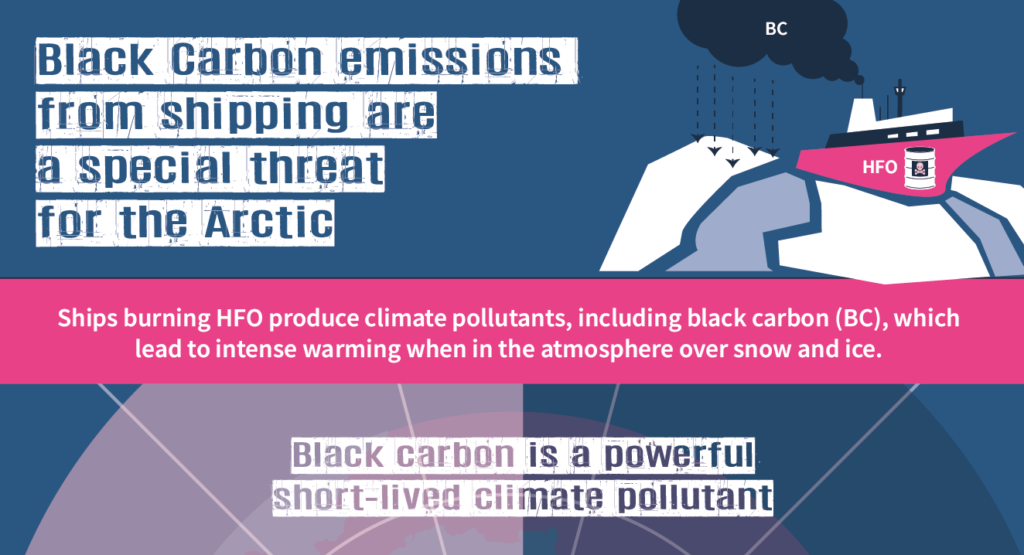 The Clean Arctic Alliance invites you to join an online event to explore how Arctic shipping can help alleviate the changes take place in the Arctic, and to pose this question: Can a switch to alternative, cleaner fuels contribute to reducing black carbon emissions from Arctic shipping?

London, 22 March 2021:- As this week’s virtual meeting of the International Maritime Organization’s Pollution Prevention and Response Sub-Committee (IMO, PPR 8, 22-26 March) opens today, non-governmental organisations are calling on the IMO to seize the chance to immediately reduce climate-warming emissions of black carbon from ships currently using heavy fuel oil in the Arctic by some 44%, by switching them to cleaner distillate fuels [1,2].

“This week the IMO has the opportunity put in place rapid and effective regulations to protect the Arctic and the global climate from the warming impacts of black carbon emissions, by obliging vessels operating in the Arctic to switch to cleaner shipping fuels”, said Dr Sian Prior, Lead Advisor to the Clean Arctic Alliance, an international coalition of 21 non-profit organisations.

“Mandating a switch of fuels in order to cut black carbon emissions in the Arctic would be an easily-won victory for both the IMO and the shipping industry, and put the sector on course towards decarbonisation. Most importantly, getting black carbon out of the Arctic would also be a win for the climate, for the Arctic and the people who depend on its ecosystem for their livelihoods”, she said.

“The IMO has been wrestling with what to do with regard to black carbon for over a decade now – but so far has taken no concrete action has been to reduce emissions. This week, with black carbon on the agenda, IMO Member States have the chance to take rapid and effective action to cut the emissions of black carbon in the Arctic” added Prior.

“At PPR 8, the IMO should put in place regulations to ensure the shipping industry switches to distillate fuels, such as diesel or marine gas oil (MGO), or other cleaner energy sources, for vessels operating in or near the Arctic. In addition, vessels using diesel or MGO should also be required to install and use particulate filters, as are already required by land-based transport. Such a move could be led by the shipping industry – an act which would bolster confidence that the sector is serious about staying the course towards decarbonisation”.

“The bunker industry, which supplies fuel for shipping, has indicated that it can meet the necessary demand for alternative fuels to support a migration away from using heavy fuel oil in the Arctic. Ultimately, international regulation by the IMO will also be needed to eliminate emissions of black carbon from shipping, worldwide”.

“Indigenous Arctic communities are extremely concerned about the profound climate changes we are experiencing on the ground”, said Austin Ahmusak, Kawerak Marine Advocate, Nome, Alaska. “The Arctic is warming as a result of human-induced changes to the atmospheric carbon cycle, and has already had an impact on the rich biological diversity Arctic peoples have enjoyed for thousands of years.”

“It is important that humanity does not stand idly by and accept the current status quo with respect to greenhouse gas emissions, as well as black carbon. Black carbon is just one issue that Arctic Indigenous people need the global community to address. Reducing black carbon from all sources, including shipping is essential – to help to save Arctic species, ensure Indigenous community health, and to prove that humans are worthy stewards of the globe. We call on the whole world to dramatically reduce its black carbon footprint, and the IMO can lead on this by cutting black carbon from Arctic shipping”, continued Ahmusak.

Climate change is having a more rapid impact in the Arctic than anywhere else right now – the recent cold weather that blanketed North America and Europe, and caused chaos in places like Texas, has been linked to the consequences of a warming Arctic. The polar vortex, a low pressure area that spins over the pole during winter, is reportedly being interfered with by strong winds that encircle the planet – the jet stream — which is itself being shifted as a consequence of Arctic warming. What happens in the Arctic doesn’t stay in the Arctic – changes taking place in the north will have repercussions further south [3].

Around the world, ships typically burn the cheapest and dirtiest fuel left over from the oil refining process – heavy fuel oil (HFO), which produces high levels of black carbon when burned. In January 2020, a new fuel standard was introduced by the IMO requiring ships’ fuels to contain no more than 0.5% sulphur leading the development and use of so-called very low sulphur fuels (VLSFOs) [4].

Although these fuel blends contain both heavy and lighter fuels, most will still be classed as HFO since they exceed the density limit used in the definition of HFO. About 7-21% of global shipping’s climate warming impacts can be attributed to black carbon – the remainder being CO2 [5]. When emitted by ships in and near the Arctic, black carbon particles enter the lower levels of the atmosphere, where they remain for under two weeks, absorbing heat. But when it eventually comes to land on snow or ice, black carbon’s warming impact is 7 to 10 times greater, as it reduces the reflectivity (albedo) and continues to absorb heat, accelerating the Arctic melt [6].

In November 2020, the International Maritime Organization (IMO), the UN body which governs shipping, approved a ban on the use and carriage of HFO in the Arctic – a ban that is set to be adopted this June. Although environmental and Indigenous groups had fought for years for the Arctic to be free of HFO, this ban set to be agreed in a few months contains serious loopholes which will mean minimal reductions in the use and carriage of HFO in 2024 when implemented. Meanwhile current growth in Arctic shipping is likely to lead to an increase in HFO use and carriage in the Arctic between now and mid-2024 when the ban takes effect and further growth by mid-2029, when the loopholes will finally be closed. Under this regime, black carbon emissions are likely, for now, to continue to increase in the Arctic [9].

Infographics: How Black Carbon Emissions from Shipping Impact The Arctic

[2] According to the International Council on Clean Transportation’s study on the IMO’s proposed heavy fuel oil ban, HFO-fueled ships emitted 225 tonnes of black carbon in 2019. If they switched to distillate, they would have reduced their BC emissions by 44%. If so, total black carbon emissions from Arctic shipping would have fallen 30% from 356 tonnes to approximately 250 tonnes, accounting for BC emitted from all fuels. This calculation is based on the black carbon emission factors used in the Fourth IMO GHG Study.

[3] Heating Arctic may be to blame for snowstorms in Texas, scientists argue https://www.theguardian.com/science/2021/feb/17/arctic-heating-winter-storms-climate-change

IMO Submission: Consideration Of The Impact On The Arctic Of Emissions Of Black Carbon From International Shipping: Greenhouse gas emissions from global shipping 2013-2015 https://www.hfofreearctic.org/en/2017/12/01/greenhouse-gas-emissions-from-global-shipping-2013-2015/